By Azad RosayPublished On: September 11th, 2020

In the first part of this article I investigated the perception of change and the pivotal role of a change champion. In this second part I’ll explore the identifying characteristics I found in my research that lead to success and areas that can cause resistance. I also look into the differences we find if we ask different populations to define a change champion, or to list what could stop a change champion from having an impact. The aim was to discover whether individuals’ backgrounds and environments can impact their perception of the change and inform ways to better manage transformation.

We know transformation in organizations are difficult and frequently unsuccessful. Research has shown that an unsuccessful change initiative within an organization can create a loss of profit along with loss of internal and external credibility. In addition to the business cost, the impact on the employees can create frustration and disillusionment, which affects the productivity of the team (Warrick, 2009).

HR managers and leadership teams often have to choose the change management strategy for a transformation. The goal is to pick the best processes and to build the best team to facilitate the transformation across the organization.

To propose a better way to do so, I did research on (1) what employees expect from a change champion and (2) what they see as potential creators of resistance to change. As explained, here a change champion is someone from the organization not affiliated with the change, but using her/his influence in support of it.  I sliced the respondents into stakeholder groups such as “HR group” or “Research and Development group”. The results show that employees’ perception of change depends on their role in the organization.

Out of the 23 groups studied, all have different perceptions about the skills that change champions’ skills need. In the research results, there are clear differences between organization’s functions in the perception of the change. Survey respondents from the Finance function chose “Communication skills with all levels” at 91%, plus “Have a vision” and “Emphatic” at 64% for the three compulsory skills for a change champion. In the same survey, the respondents from the Marketing function voted for “Have a vision” at 76%, “Leadership” at 69% and “Credible” at 66%. These results showed that the change champion for a marketing transformation should be different from a change champion in a finance transformation. The study reached the same conclusion about the potential origins of change resistance. The survey highlighted the differences of perception not only between functions, but also between locations, industries and the number of changes an employee had experienced. 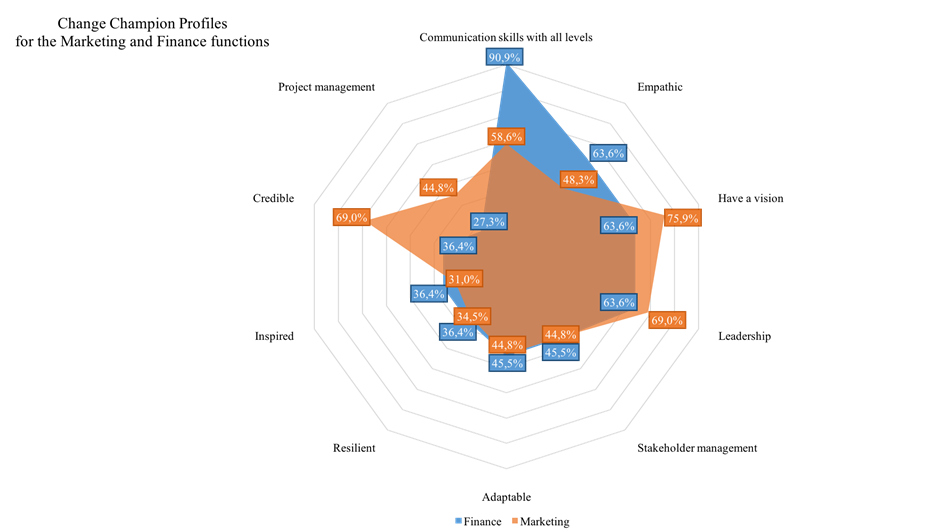 Regarding the inhibitors of change success, there are differences too. First, the inhibitors around “transparency” were often the most impactful ones. The rankings and scores were different for the twenty-three groups of respondents.  The perception of the change inhibitors such as “process not followed” created gaps in the survey. As an example, 45% of the survey respondents from the Finance function see “Process not followed” as an impactful organizational dysfunction regarding the change. While, only 6% of the respondents from the Research and Development function see “Process not followed” as an impactful dysfunction. The change resistance in the organization will be triggered by different factors depending on the transformation and its stakeholders. Management and leadership teams could anticipate this by applying the same research that I did. 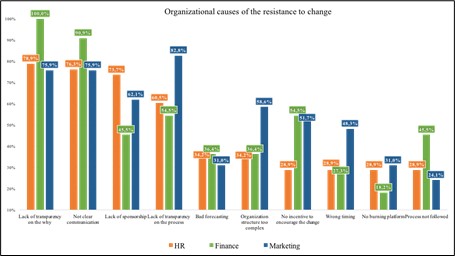 These findings indicate that managers should listen to their employees’ visions and feelings and capture differences such as I found in the survey. If there are differences, leadership teams and HR managers could adapt their strategy beforehand and increase their chance of having a successful transformation. All the transformations’ stakeholders would benefit from the results and findings of this research.

There is not a generic change champion. There is not one way to better manage the change.

With the research findings, management can understand that different groups of employees have different expectations regarding the change process. Different functions, locations and management levels don’t share the same opinion about how transformations should be managed. By learning this, management and leadership teams should realize that managing the change one way all across organization does not make sense and decreases the likelihood of change success.

Organizations should carry out a survey before developing the transformation’s strategy.

By doing this, management and leadership teams will be able to nuance and adapt the change processes depending on who they are managing and hopefully increase the probability of change success. For example, instead of looking for a change champion based on indicators pulled from outside academic research, I would recommend the organization conduct inside research. In this way, management will know employees’ perceptions of change champions.

Involving employees in the decision process will be beneficial for all the stakeholders.

With internal research, the organization will give employees the opportunity to express who they are, what they are expecting from an organization and what they see as dysfunctional. It will be beneficial for the transformation process as well as in the daily life of the organization because management and leadership will better understand their employees.

Instead of basing strategy on intuition or previous research, my recommendation is that organizations improve their decision making regarding the transformation with the application of more knowledge about their own people. Employees would be more engaged in the change process as everybody would have participated by sharing their opinion.

In the end, by investing in a research tool to learn about its own employees, an organization would not only learn about its employees but make employees accountable for the change process itself because the future decisions would be made based on their answers. A tool that allows an organization to learn more about its employees, increases change success rates and increases involvement toward the success of change should be worth an investment.