By Shontelle BryanPublished On: February 20th, 2020

Tensions in some form exist in every workplace and impact how individuals and groups are viewed and treated.  These can lead to mindsets of ‘us vs them’ which creates distance and negatively charged interactions between groups.  One of the contributing factors to the ‘us vs them’ mentality, could be the physical design of the organisation, which involves the number of floors the organisation occupies, the types of employees that sit on those floors, their role, salary, education and so on.

Is physical layout really that important?

Research was conducted in North America and the United Kingdom with individuals from the Oil and Gas, Manufacturing and Information Technology sector. Results revealed that engineers from the Information Technology sector, who worked on the first floor of their office building thought of themselves as ‘lesser than’ the engineers that worked on the second floor.  These engineers had lower academic qualifications than those who sat on the floor above them, but they possessed specialist skills. They often felt nervous venturing ‘upstairs’ to collaborate on initiatives.

Furthermore, they frequently felt that they were being victimised by Management who worked on the floors above them.  They also often complained about the lack of work tools to do their job.

Similarly, individuals who worked in a warehouse/plant and open-aired setting in the Oil and Gas, and Manufacturing sector, felt that Management was not interested in their views and they would sweat and toil while their bosses reaped all the perks.  The divide was evident, as these individuals would assemble around their work areas to socialise, and often felt skeptical venturing into the office building for discussions about any matter.

There were obvious tensions and even biases in these scenarios, and this way of thinking could be linked to social structures in the Edwardian manor house in generations past, where servants /workers occupied the ground floor of the establishment or barns and the royals/owners who have money,  power and accolades, occupy the upper floor.  Access to the upper floor was often a nerve-racking experience, as some form of rebuke or chastisement was expected if proper manners and protocols were not adhered to.  This is characteristic of the ‘us vs them’ or ‘upstairs vs downstairs’ mentality as depicted in the diagram below. 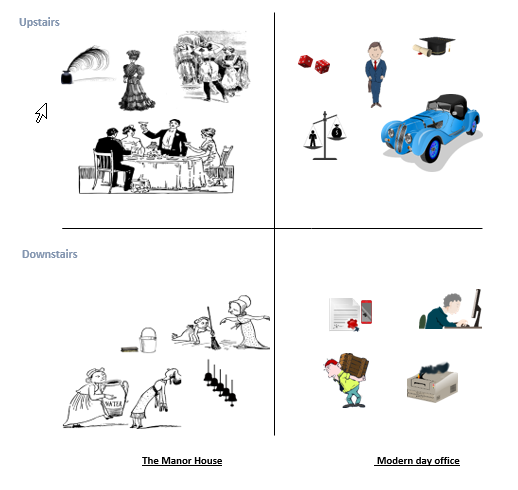 This mentality has often been the brunt of jokes on television and other media, but can it be, that it is important and still relevant in workplaces today, as it not only dictates our conscious and subconscious thoughts and how individuals react to one another but the success of organisational change.

Once individuals in the Information Technology sector were given a promotion and were allowed to sit with the team on a higher floor or allowed to work on corporate transformation initiatives with teams that sit on floors above them, their perspective and attitude changed in a positive way.  Self-confidence and comfort levels with peers increased.  These individuals were now willing to share their views, viewed their work as important and themselves as a crucial part of the organisation.  Similar results were obtained when individuals who work in warehouses/plants and open-aired jobs were given permission to work on corporate initiatives with Management, where most meetings were held in the office building.

The physical shift to a higher floor or from an outdoor facility to an office setting made a significant positive change in moral, collaboration on initiatives and productivity.

The ‘upstairs/downstairs’ mentality should be its own change project and dealt with as a matter of urgency.  Below are a few tactics Management can employ:

Tensions and biases in the organisation can be lived out by the ‘us vs them’ or ‘upstairs/downstairs’ mentality and can impair and stifle an organisation’s efficiency and productivity.  Swift and deliberate measures should be taken by Management to address these tensions, and restore balance, so the workplace can thrive.

In part 2 we will look at some of the tactics Change Leaders could employ on change initiatives, in workplaces that previously struggled with this mentality.

About the Author: Shontelle Bryan

Shontelle Bryan is a change management professional with over 15 years’ experience working with financial, government and private sector organisations in Europe and the Americas. She is an APMG accredited trainer in Change Management and Managing Director of Change Consult Ltd - a bespoke consultancy and training organisation that focusses on organisational change.

About the Author: Shontelle Bryan

Shontelle Bryan is a change management professional with over 15 years’ experience working with financial, government and private sector organisations in Europe and the Americas. She is an APMG accredited trainer in Change Management and Managing Director of Change Consult Ltd - a bespoke consultancy and training organisation that focusses on organisational change.