“Most leaders already know what they should be doing. What they lack is the personal development to do so.”

In The Origin Story, you learned that vertical development has roots in psychology. Let’s look at how this psychological construct affects organizations through the interplay of adult development with leadership and change.

The three-tier, eight-stage model presented here is from the Vertical Development Academy, called the Leadership Maturity Framework. (The fourth tier, Transcendent, is outside the scope of this series so is not included in the table.) 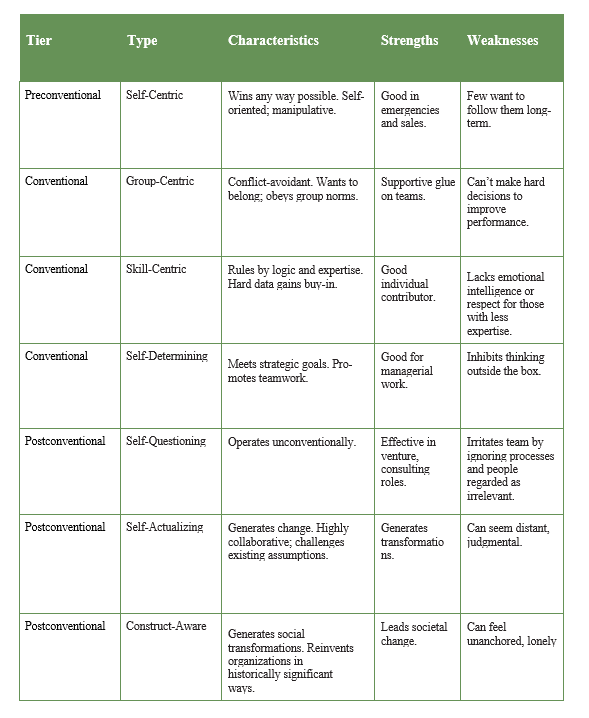 The first tier, Preconventional, contains one stage of development: Self-Centric. We won’t spend much time in this stage, as it contains less than five percent of adults, but it is worth learning the traits so we can recognize them.

Self-Centric individuals are occupied with their own needs and believe luck plays an important role in outcomes. They believe in bending things to their will without consideration for others.

Strengths include self-protection, clarity about preferences, and persistence. People in the Self-Centric stage are defensive toward feedback and distrustful of others, so teamwork is not a hallmark of this stage. People at this stage may describe their worldview as “my way or the highway.”

While this stage has leadership limitations, it can be a terrific fit for sales roles focused on winning business. However, it would be challenging to give a Self-Centric salesperson more responsibility, with the attendant complexity.

The Conventional tier comes next, and it’s where most adults (75 to 80%) find ourselves. This tier is characterized by outside-in thinking—I look to others for feedback about what I should think, feel, and do. I’m not self-generating my thoughts or resolving conflicts.

The first Conventional stage, Group-Centric, contains ten percent of adults. Group-Centric identity shifts from meeting my own needs to identifying with a group. Affiliation with family, tribe, or other group provides identity and protection. Loyalty is a fundamental value, and the overriding fear is exclusion from the group. Cultural portrayals of the Mafia, from The Sopranos to Goodfellas, provide an iconic picture of Group-Centric thinking (though the Mafia’s negative connotation should not be applied to this stage).

Because of the need for outside approval, Group-Centric leaders provide functional “glue” in groups. Receiving feedback, self-reflection, and identifying tensions are difficult at this stage. While Group-Centric thinking confers benefits in certain contexts, this stage is not well-suited to leadership, and change will be difficult without a clear message from the group leader.

The second Conventional stage is Skill-Centric, containing about 40 percent of adults. From Group-Centric and Skill-Centric, the goal changes from fitting in to standing out. We want to be recognized for our subject matter expertise, and our biggest worry is being like everyone else.

The impulse to stand out can lead to deep subject matter expertise and excellent problem solving that helps organizations thrive. However, the Skill-Centric stage can get tricky from a leadership standpoint because of a “yes, but…” tendency (as opposed to “yes, and…”) that impedes collaboration and change. Skill-Centric meaning-makers tend to think they are the smartest person in the room, which isn’t conducive to teamwork. Feedback at this stage often provokes a defensive reaction. As their own worst critics, Skill-Centric people often struggle with failure.

Watch the video and look for examples of Skill-Centric behavior from Harry Connick, Jr. on American Idol. (We can’t know his stage without measuring him, so we hold that theory lightly.).

I notice Harry Connick, Jr. using his music theory knowledge to hold himself as separate (and maybe better than?) his fellow judges. He insists that there is a right answer and he knows it, as his colleagues appear curious yet somewhat put off. It makes for great television, but it’s a problematic leadership style. The Skill-Centric stage is not positively correlated with leadership effectiveness and business outcomes.

Finishing off the Conventional tier is the Self-Determining stage, containing about 30 percent of adults. When we realize that being the expert doesn’t always drive the best outcomes, and we pivot to a more collaborative approach, we transition from Skill-Centric to Self-Determining. We commonly refer to this group as achievers.

The Self-Determining leader is driven to accomplish, but unlike the Skill-Centric stage, she is open to feedback. Her prioritization and time management skills are developed, and she is open to collaboration.

It will come as a surprise to no one that Western business culture is highly identified with this stage, nor will it shock anyone that our achiever is especially prone to burnout. A common question for someone struggling in the Self-Determining stage is, “Do I have value outside of what I produce?”

We recently lost an icon of business achievement, Jack Welch, whose words in the video below are evocative of the Self-Determining stage. Again, we don’t know exactly what his center of gravity was, but we get some clues from this video.

If there is a distinction between ‘being’ and ‘doing,’ Welch is clearly on the side of doing. Notice how Welch focuses on outcomes while Connick, Jr. focuses on being right.

While there is correlation between the Self-Determining stage and leadership effectiveness, research does not support this stage as the pinnacle of adult development or the ‘best fit’ for leading and sustaining transformational change.

Read Part Five: The Postconventional Tier to learn about later stages of vertical development and what that means for change and leadership.

About the Author: Jessica Bronzert

Jessica Bronzert, founder of The Sparks Group, is passionate about helping leaders and teams develop the capacity and skills they need to be successful. Motivated by the diversity of the human experience and organizational life, Jessica employs specialized change and coaching training, and years of corporate and nonprofit experience to help clients make changes that make a difference. She has worked with and within a variety of industries. Jessica is an adjunct faculty member at the Center for Creative Leadership and a regular contributor on WCCB, Charlotte. She is a trained 1:1 HeartMath mentor, teaches the Conner Partners change execution course catalog and the Resilience Alliance course catalog on individual and team resilience, and coaches business school students at Queen’s University. She is also certified in many assessments designed to help her clients develop self-awareness. Jessica is a Professional Certified Coach (PCC) and a Senior Professional in Human Resources (SPHR). She has studied the human and organizational dynamics of change extensively, and earned a Certificate in Leadership Coaching from the Georgetown University Institute for Transformational Leadership. Jessica has an MBA from Case Western Reserve University and a bachelor’s degree from Michigan State University. Jessica was also recently named one of the 50 most influential women in Charlotte.