“No problem can be solved from the same level of consciousness that created it.” -Albert Einstein

Of all the ideas I’ve learned and taught in 20 years in leadership development and change management, vertical development is hands-down my favorite. No other framework has been more instrumental in my own development not just as a leader, but as a human. That’s why I am so eager to break this powerful idea into pieces you can put into action right away.

In 1970, futurist Alvin Toffler coined the term “future shock” to describe the result of accelerated technological and social change that causes people to feel disconnected and overwhelmed. Buckminster Fuller’s pioneering work on the acceleration of human knowledge acquisition is also key to this conversation.

Fast forward to the 21st century, where, as Toffler and Fuller predicted, change continues to accelerate, bringing complexity with it. Development expert Patrick Forth noted in his TED talk that the “clock speed” of change is now exponential, not linear, driven by personal devices that connect us to a massive digital system.

Exponential change has substantial business and leadership implications. The historical 70% failure rate of transformational change occurs when we approach change from a linear, rather than exponential, lens. Complexity helps us understand the limitations of a linear approach to an exponential issue.

When it comes to the intersection of change and leadership, the opportunity and the problem boil down to complexity.

As a leader rises in the ranks, her responsibilities and the complexity of her job rise together. In the chart below, the red represents what the leader brings to the table to meet the demands of each career level. Green represents the level of complexity at each level. 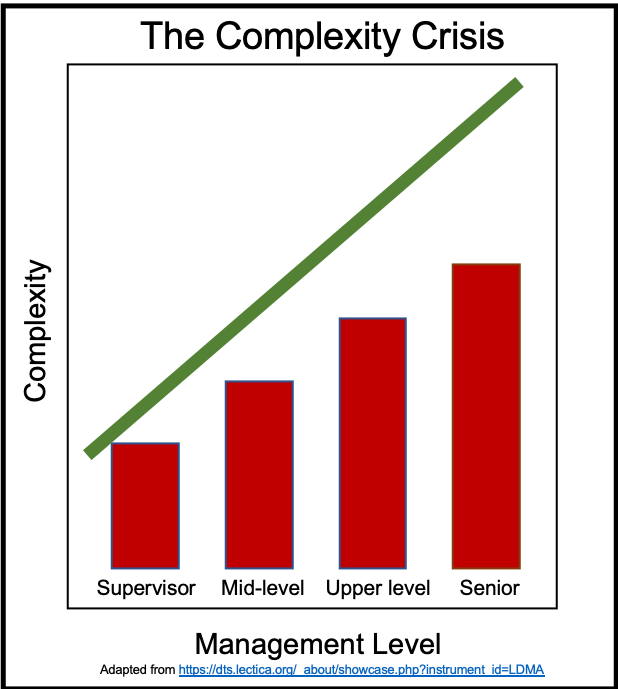 Across all sectors, growth falls behind complexity. It’s so prevalent that the assessment and research firm Lectica calls it a complexity crisis, stating, “There is a clear gulf between the difficulty of upper-level management jobs and the ability of individual humans to meet those demands.”

As things become more complex, the connection, clarity, and predictability between the cause and the effect decrease. The events of September 11, 2001 are a vivid example of the far end of the complexity continuum. It came as a shock (the opposite of obvious), chaos ensued in the aftermath (events were nonlinear), and it took some time to put together the causes (it was not a predicted event). Even in hindsight it took a long time to identify the sequence of events that led to the events, and there was no consensus about how to respond. It was chaos.

The COVID-19 pandemic is another example. Thomas Friedman crisply articulates the unforeseeable chain of events that led us to this place:

I wrote my book “The World Is Flat” about growing global interconnectedness in 2004. The world has gotten so much flatter and interconnected since…

This has driven a lot of economic growth. But it’s also meant that when things go bad in one place, that trouble can be transmitted farther, faster, deeper and cheaper than ever. So, a virus-laden bat bites another mammal in China, that mammal is sold in a Wuhan wildlife market, it infects a Chinese diner with a new coronavirus and in a few weeks all my public schools are closed and I’m edging six feet away from everyone in Bethesda.

One of the dynamics of complexity is that situations move from being solvable problems to polarities. A polarity is an interdependent pair that can be managed or optimized but can’t be solved.

A common example of a polarity is structuring an organization to be centralized or decentralized. Many organizations vacillate between these two poles as they try to “solve” the problems of one side and reap the advantages of the other. A better approach is to design an organization that maximizes the benefits of centralization and decentralization while minimizing the disadvantages inherent in both approaches. Kelly Lewis and Brian Emerson call this the “transformational third way.”

We know the world is changing faster and getting more complex. The complexity crisis resulting from accelerated change creates the business imperative for vertical development.

Extend the Idea of Complexity

Complexity has a profound impact on organizations of all sizes. Learn more about this impact, and why vertical development is the solution, in Part Two: The Business Imperative.

About the Author: Jessica Bronzert

Jessica Bronzert, founder of The Sparks Group, is passionate about helping leaders and teams develop the capacity and skills they need to be successful. Motivated by the diversity of the human experience and organizational life, Jessica employs specialized change and coaching training, and years of corporate and nonprofit experience to help clients make changes that make a difference. She has worked with and within a variety of industries. Jessica is an adjunct faculty member at the Center for Creative Leadership and a regular contributor on WCCB, Charlotte. She is a trained 1:1 HeartMath mentor, teaches the Conner Partners change execution course catalog and the Resilience Alliance course catalog on individual and team resilience, and coaches business school students at Queen’s University. She is also certified in many assessments designed to help her clients develop self-awareness. Jessica is a Professional Certified Coach (PCC) and a Senior Professional in Human Resources (SPHR). She has studied the human and organizational dynamics of change extensively, and earned a Certificate in Leadership Coaching from the Georgetown University Institute for Transformational Leadership. Jessica has an MBA from Case Western Reserve University and a bachelor’s degree from Michigan State University. Jessica was also recently named one of the 50 most influential women in Charlotte.